The issue of homosexuality is widely taboo in the Middle East, including Yemen where the penalty for being gay can be severe. Despite such suppression, one young Yemeni man has declared his homosexuality very publicly in a blog. He spoke to a BBC Arabic reporter about the reaction he received and his fears for his safety.

In the early days of Yemen’s revolutionary uprising a 21-year-old student preparing to sit his finals at Sana’a university emerged as one of the key figures in the country’s youth movement.

Alaa Jarban organised and led protests throughout the revolution in 2011, calling for the ousting of then-Yemeni President Ali Abdallah Saleh.

Last week, inspired by the hope the revolution created, Alaa became one of the first people to come out publicly as gay while still living in Yemen.

Those following him on social networking sites found out about his sexual orientation through a link to his blog where he announced: “I’m Queer.”

In his post, Mr Jarban revealed intimate thoughts and reflected on a perplexed and isolated period of adolescence growing up as a gay boy in a conservative society.

News of his statement spread quickly through Yemen’s activist community, and has already provoked a strong backlash.

In a country where homosexual activity is illegal, many in Yemen’s revolutionary circles still do not equate freedom with sexual liberation.

Asked why he came out so openly when the repercussions could be so severe, Mr Jarban replied: “It’s very difficult to live a life that is not you every single day.

“I took part in the revolution to change our reality; it is not a revolution if we don’t revolutionise every aspect of our community and ourselves.”

The rights activist was speaking from Canada where he was attending a conference. Since coming out, he has continued his life with little interruption, trying to ignore the hate mail he now receives.

Since his revelation, Mr Jarban has been attacked by those he previously thought of as friends and revolutionary comrades.One message on his blog read: “You make me sick. I can’t believe I shook hands with you one day. Can’t believe we were in the same square and revolution together.

Mr Jarban knew his statement would not be received well, and yet he is still sad and hurt at losing many close friends as a consequence of coming out.

“But I will never regret doing it,” he said.

Alongside the hateful messages, he also found support from a small community of more accepting people.

Finding positive support shared on a public platform, regardless of how small, shows a distinct shift in attitudes towards homosexuality among some in Yemen.

“Tolerating homosexuality is associated with modernity,” said Brian Whitaker, author of Gay and Lesbian life in the Middle East.But while for some that is a good thing, for others it reinforces the idea that Yemenis need to preserve their traditions in order to fight off this creeping so-called “Western modernity”.

The prospect of accepting homosexual people seems distant in a country that does not acknowledge their existence.”I asked friends where is the gay community, and people said there are no gays in Yemen,” wrote a girl who was afraid to share her real identity on Alaa’s blog, which has become a platform for contributors from the LGBT [lesbian, gay, bisexual and transgender] community.

“When the protests reached Yemen, I decided to take part in the hope of finding a new side to my country, a side I could finally relate to,” said Mr Jarban.

But that hope began to wane as he watched the limited impact the revolution had on traditional Yemeni life and attitudes – despite the ousting of a president who had ruled for 32 years. 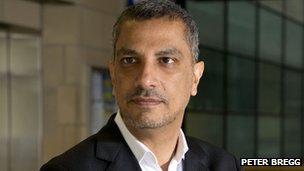 Kamal al-Solaylee – author of Intolerable: A Memoir of Extremes, a book about the trials he faced coming out as member of the Yemeni diaspora – described Mr Jarban’s decision as brave, especially for a man so young.

“But he understood the consequences when he made that decision,” said the Canadian of Yemeni origin.Acutely aware of those consequences, Mr Solaylee is nearly 50 and lives in Canada.After his book was published, gay Yemeni men sought him out, eager to share experiences and embrace their sexual identity in an accepting Yemeni community.Mr Solaylee was deluged with emails and letters. “I became the godfather of gay Yemeni men,” he joked.

He feels protective of Mr Jarban and wants to help him, but there is little he can do if the 23-year-old decides to stay in Yemen.”He can’t possibly go back to Yemen,” said Mr Solaylee, who is both concerned about the younger man’s safety and a possible crackdown on Yemen’s LGBT community.For his part, Mr Jarban feels torn by having to make a decision.

“I feel lost,” he said. “People tell me to stay in Canada where I would be safer.”

Yemen’s transitional government has much to deal with other than the security of minority communities.The overstretched administration is tackling mounting security threats from al-Qaeda, recurring clashes with Houthi rebels in the north, a moribund economy and is in the midst of a thorny so-called National Dialogue.

“Diplomatic pressure might be exerted on the government not to prosecute Alaa if the situation gets complicated,” said Brian Whitaker. “But it [the Yemeni government] can do very little to protect Alaa.”

The Yemeni government did not respond to BBC requests for a comment.In Canada he is safe, but Mr Jarban knows that sooner or later he will have to face the repercussions of his decision.But that has not deterred him from being vocal about LGBT issues at home.

“The situation has to change,” he said.